Group 5 are Dicotyledons (as are Groups 6, 7 and 8).  Leaves have herring bone or netted veins.  The sepals, petals and stamens are in multiples of 4 or 5.  Stamens as many as or more than petals.  The ovary sits above the base of the petals.  Flowers are radially symmetrical.  Includes Euphorbiaceae, Crassulaceae, Ranunculaceae, Droseraceae, Caryophyllaceae, Brassicaceae, Zygophyllaceae, Geraniaceae, Rutaceae, Linaceae, Malvaceae, Apocynaceae, Oxalidaceae, Convolvulaceae, Plumbaginaceae, Gentianaceae, Ericaceae, Penaeaceae, Thymelaceae, Proteaceae, Solanaceae, Boraginaceae.

p172 of the Field Guide to Fynbos by Dr. J Manning
These are the Sundew family named on account of the shiny hairs.  The Sundews are distributed world-wide and there are about 20 species in South Africa.  There are 14 Fynbos species and so far two seen at Fisherhaven on shallow clayish soils where there is poor drainage.

Drosera cistiflora is a plant growing to about 20cm high with a large white flower to 50mm diameter.  It has the off-putting common name of Snotrosie.  Here the flowers are white.  They can be pink or red elsewhere. 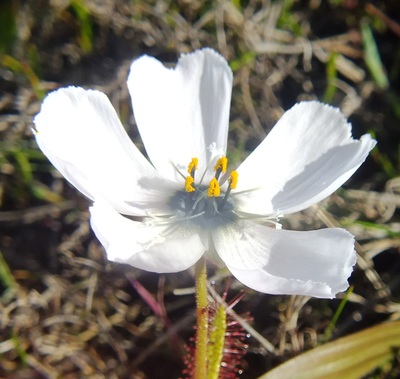 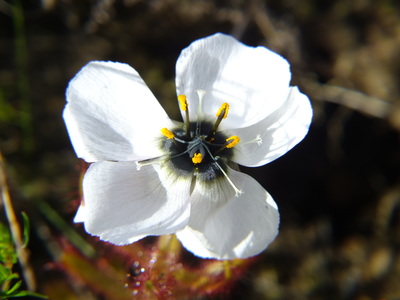 Drosera trinervia is a smaller plant to about 10cm with a smaller white flower to 15mm diameter.  Both species grow in shallow wettish soils.  They have a basal rosette of leaves and I quote from the excellent reference Planzafrica, the SANBI website that is a must if you want to learn more of D. trinervia ecology.  See  PlanZAafrica.

“Flowers open very briefly for a few hours with strong sunlight. The flowers can be pollinated by insects, but are usually self-pollinated. When the seeds are ripe, their capsules open to release the fine, lightweight seeds which fall out and are dispersed near the parent plants. Probably the most interesting characteristic of this plant is its ability to digest the nutrients, especially the nitrogen it requires, from insects caught in its tentacles. The tentacles are sensitive and mobile and end in a bulbous head in which the glandular cells occur. These glands secret a glistening, sticky, clear fluid used to trap and retain prey. There is speculation that the fluid is slightly sweetly scented to attract insects. The fluid contains a weak acid and enzymes that digest the soft parts of the prey. The sensitive tentacles are able to detect caught prey and produce more dew to entrap the victim. Neighbouring tentacles then mobilize and slowly lean over to engulf the hapless victim. The lamina itself may also fold over to enclose or suffocate larger prey and allow for better absorption. As sensitive as these tentacles are, they are able to distinguish between a meal and other stimuli, for example, the leaf and tentacles do not respond to water droplets.” 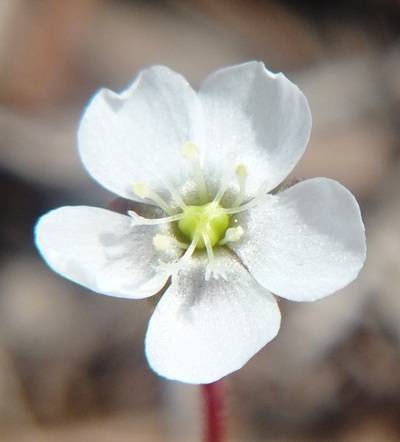 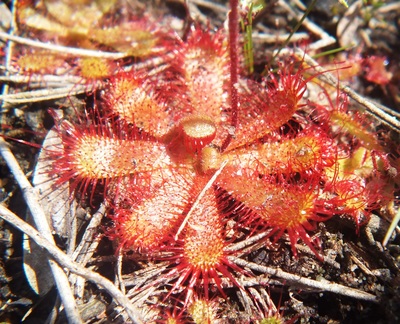 This is such an important group of plants of the Cape Floral Kingdom and yet is not very well represented in the immediate Fisherhaven area.  Of the true proteas I have seen only Protea repens and that may have been planted.  Perhaps a problem of these plants as garden subjects is their longevity (sometimes short lived), and a problem of obtaining well grown and strong young plants.  Too often the quality of young plants available in nurseries is not good enough to meet domestication of these plants.  There are some guidelines and I cannot recommend Dr Vogts’ highly enough in regards to all aspects of knowing and growing.   Dr Marie Vogts of Betty’s has played a major role in the popularisation of the Proteaceae and she gives a marvellous account of them all in her book “Proteaceae – know them and grow them”.   A major point is that these plants are adapted to poor soil with a strong thin top layer of organic material although there is a problem that some materials may encourage plant killing fungi.  Good drainage is a must even though there are species that may be more tolerant than others.

Leucodendron is a genus called the Cone Bushes or Tolbos.  The sexes are on separate plants and they may appear a little different and more so with differences in season when they flower.  The flower is actually a dense concentration of small florets in rounded heads.  The male flower presents only stamens and the female flower only stigmas from between fairly woody bracts that eventually grow over and form the fruiting cones.  Where many flowers are attached to a single point at the end of a branchlet that point is called the receptacle.  “On female Leucodendron plants each floret (little flower) on the receptacle has a think fleshy floral bract, large enough to cover the perianth (flower structure) tube,  but leaving the tiny perianth segments (petals etc) with their sterile stamens and fertile stigmas, free and peeping over the edge.”  As the seeds set and fruit grows these spirally arranged bracts eventually become the woody protective cones that hold the seed.  The cones may be retained on the plants and sometimes only release the seed after fire.   The flowers are surrounded by large bracts (and with a bit of confusion with leaves) to form what is named an involucres and these leaves and bracts can be colourful.

The genus was most thoroughly studied and revised by Ion Williams in 1972 from a base at Fernkloof and it is an extraordinary achievement as he was an engineer and not a botanist at all.  It is very difficult to recognise just how much outside amateur interest and non-institutional workers interest has contributed to knowledge of plants.  My private gripe is that this potential area of support for biology is suppressed by draconian conservation attitudes by people who should know better.  There are of course serious drawbacks in amateur activities but there are also sometimes serious inadequacies of professionals too.  A problem in many genera is that amateurs are rather restricted in their interest and activities to the particular group of study and may miscue the whole process of arriving at a classification that is in tune with all life forms.  Professionals do not always avoid this same trap.  In  Leucodendron, and I am sure this applies to many genera, the variation is so great that there is in fact no true reduction to species and therefore the names may not have the reality that they suggest.

There are four species here (of the 79 formally recognised) as far as I know to date.  For people in Fisherhaven who want a natural low maintenance garden these are four species worth some attention.   I think they would get it if the fear of  super powers did not so suppress  curiosity about nature.

​Leucodendron teretifolium is not in Dr Manning's guide to the fynbos and also not listed for the Fernkloof Reserve despite being so widespread throughout the whole central South Western Cape from north at Laingsburg to south at Cape Agulhas.  I first encountered the species on a plot in Broadway and simply could not guess what it was until I realised I was seeing only the male plants in flower.  This comes from not observing properly.  The leaves of this species are very needle-like but quite thick.  As Dr Vogts explains, these plants are not as conspicuous as the more colourful proteas, but they do provide a wonderful counterpoint to our vegetation. 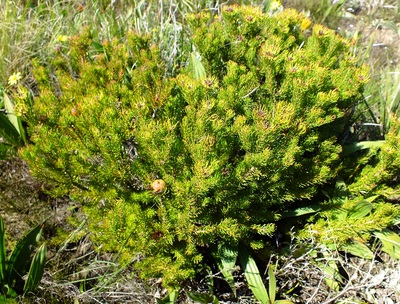 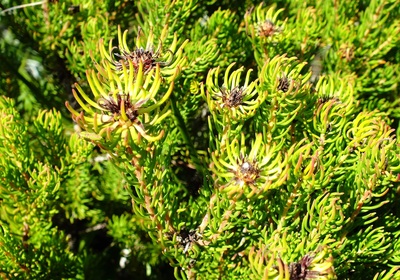 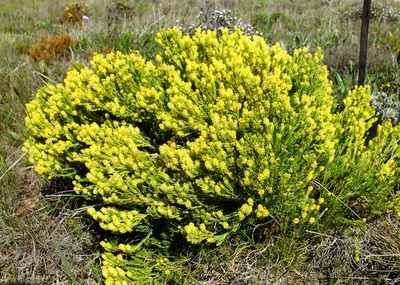 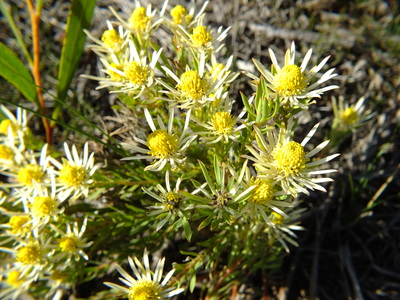 Leucodendron spissifolium is a species which amazes me as it provides a kind of Persian carpet texture and colour to the vegetation.  To give some idea of their variation, there were as many as 15 recognised species reduced to this single name.  It occurs throughout the sandstone formations of the SW Cape and into Southern Kwazulu-Natal.  The leaves around the flower (involucres) can be quite colourful although muted and individual plants can be quite different from one another. 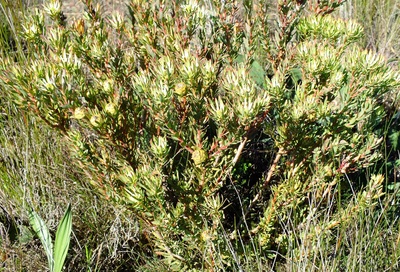 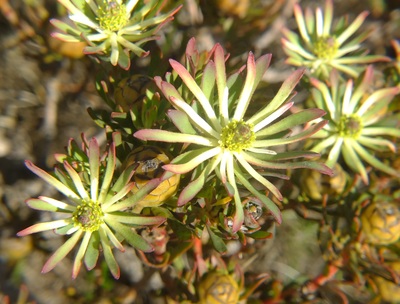 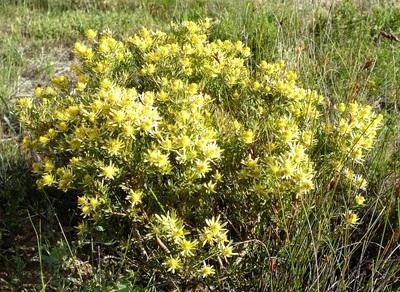 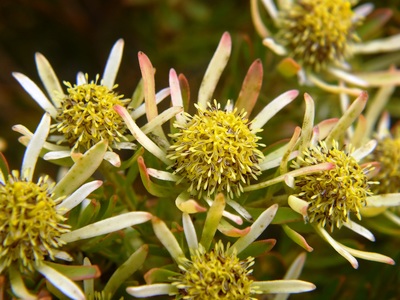 ​Leucodendron salignum occurs from Van Rhynsdorp eastwards to Port Elizabeth.  Curiously I know it as a very conspicuous shrub up to 1m tall with – conspicuous because of the very yellow colour of the leaves.   The female flowers have larger involucral leaves but less colourful than those of the male and they shield the flower.  In the male there is reddish colouration and the small rounded flowers are not so concealed.  Curiously I ran into a problem in that the plants I photographed seem to be contrary and this is not uncommon in my experience with plants. 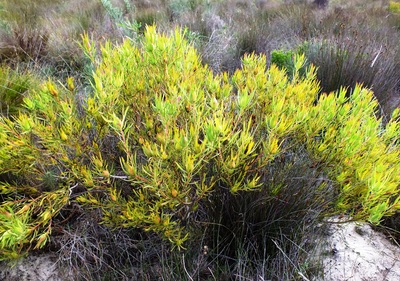 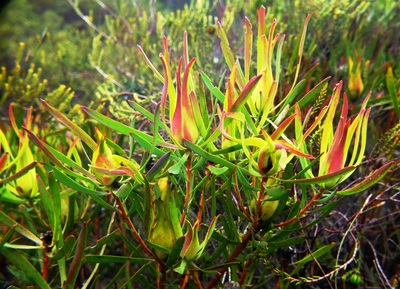 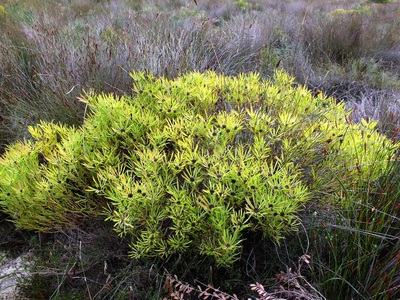 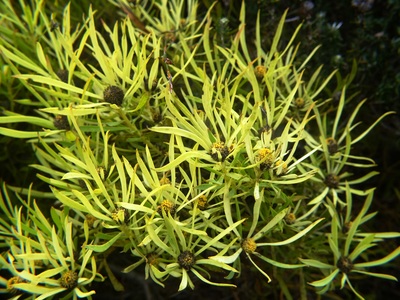 ​This is one of the tallest plants in the village area of Fisherhaven although only growing to a maximum height of 2m.  It also demonstrates the puzzling problem of diversity because there are places where it occurs as a much smaller plant.  Dr Vogts specifically mentions a smaller Hermanus form.  The males have finer foliage and may appear quite different to the female.   It is an easy plant to grow and apparently cultivated worldwide and used in the wild flower trade.   It is really interesting to observe the changes in the plants as they come into flower and then seed.  My feeling is that some agreement should be reached with Nature Conservation to harvest seedlings on doomed and disturbed plots where they are often common.  These could be used to transform unwalkable messy pavements, despoiled spaces or donated to gardeners who want this kind of vegetation. 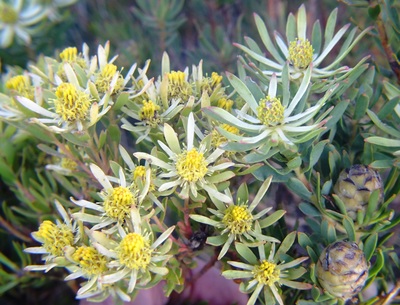 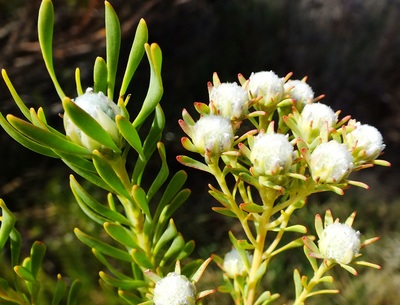 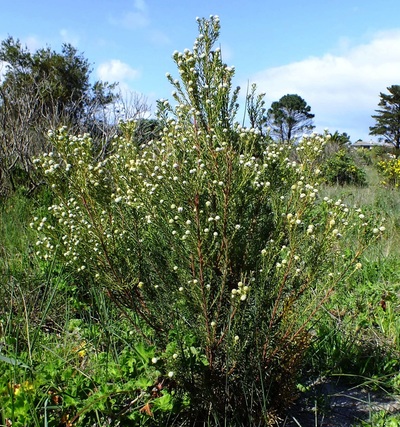 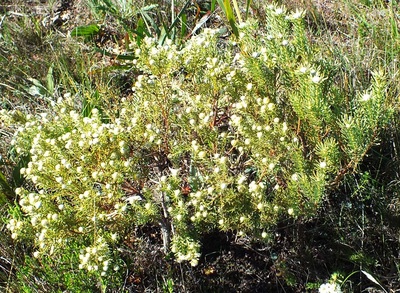 These are the Pincushions and they are magnificent garden subjects.  The one species here is probably not a garden subject in local gardens as it does not meet the needs of a European orientated garden style.

Leucospermum prostratum has trailing stems and forms a mass of low lying stems with smallish flowers.  It is usually on the sandier areas and flowers for a long time in the year with bright yellow flowers turning to deep orange. 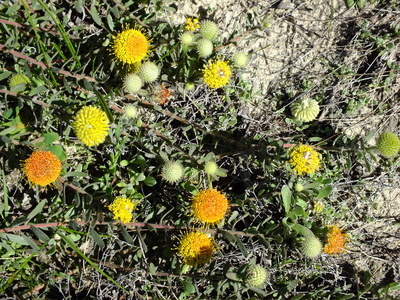 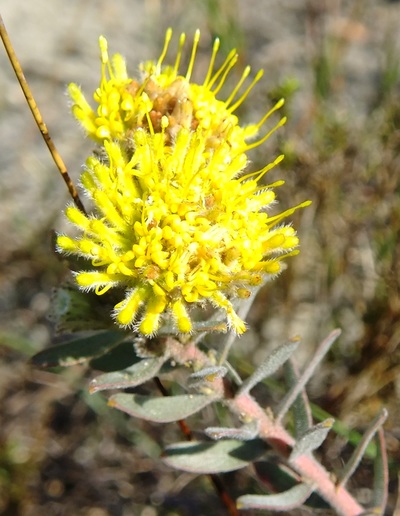 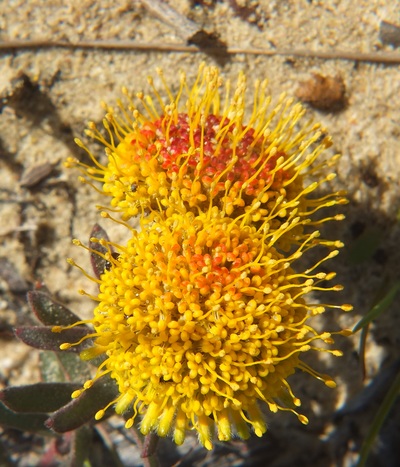 The Oyster-headed protea?  Just what is its common name?  Thistle protea?  Scolymus refers to a European genus of thistle-like plants but the word scolymus must come from the Latin name for the oyster?  This is a really beautiful small protea growing to a neat small bush up to 1m in height.  It is not common here in Fisherhaven and the populations around Hermanus are outliers from the limited areas in which it occurs from the Cedarberg down to Worcester. 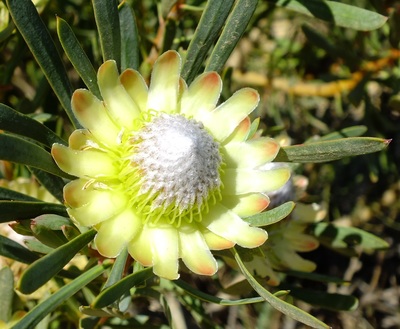 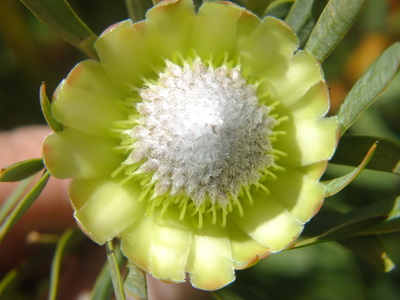 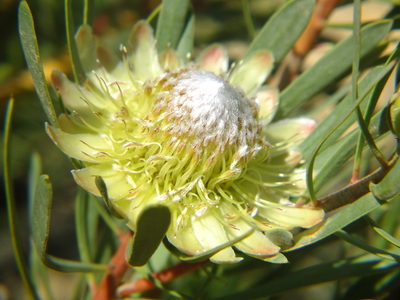 Also known as Spiderheads.  The most well known is the Blushing Bride (Serruria florida), which does not occur in Fisherhaven.  The small flowers are in small clusters and it is the surrounding colourful bracts that attract attention.

This seems to be the local species growing into a low bush to about 800mm high with an equal spread.  The leaves are finely divided and the flowers in small pink clusters.  Scattered about Fisherhaven but usually in the sandier soils.  There is a very similar species S. rubricaulis that quite frankly I find difficult to concede on the basis of the limited information I have.   But I did make a mistake with S. adscendens when I was confused by a picture I had taken of the flower in the bud stage and could not relate that to pictures of the flowers when open.  The flowers are beautifully fragrant. 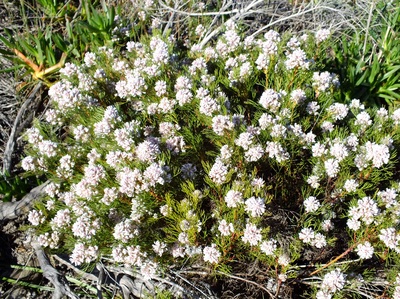 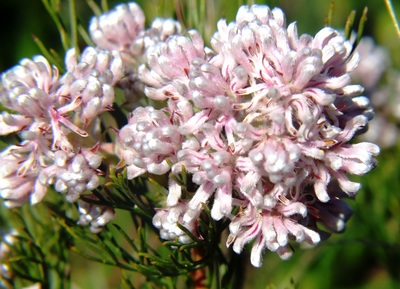 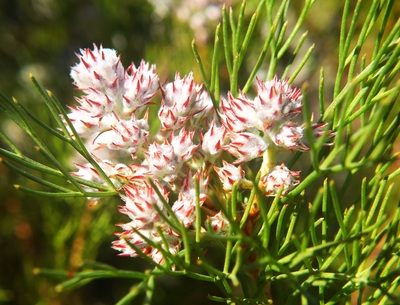